Escambia County’s opening round win over the Andalusia Bulldogs in the AHSAA playoffs has earned them a rematch with the No. 3 Jackson Aggies this Friday.

Despite the loss in the first match against Jackson, Blue Devils head coach Mark Heaton is keeping a positive attitude about this week’s game.

“It’s hard to beat a team twice,” Heaton said. “My high school coach always said that it’s hard to get a win against a team twice in one season. I’ve been in this situation before where you play in the regular season and again in the playoffs. It’s a lot harder to get the win the second time around.”

With the Blue Devils playing at a higher level in the playoffs, it might just be harder for the Aggies to get a repeat win.

Since their last meeting, the Blue Devils have won three straight games including last week’s 19-6 romp at Andalusia.

Heaton is not the only one excited about taking on the Aggies again. He said his players are ready for another challenge.

“We are excited about the chance we have,” Heaton said. “I feel like we are much-improved from the first time we played them in week eight. It’s going to be a heck of a ballgame for both schools.”

With one game against the Aggies under their belts, the Blue Devils have some idea of what to expect while preparing for this match up.

The Blue Devils played well in their week eight meeting, but gave up a couple of important plays, according to Heaton.

“We played extremely well against them defensively,” he said. “We gave up a couple of big plays, but I feel like our defensive intensity was high throughout that game.”

Since that game, the Blue Devils are on a three-game winning streak and have improved in each of those wins.

Heaton said he sees much better things in terms of how his offense and special teams is playing.

“Offensively, I think we are putting a better product on the field,” he said. “I think this time around we will be more competitive and move the ball more to sustain longer drives. That will be key in gaining a win against a team of their caliber. Our special teams is also playing much better now. They are doing a great job on returning kicks and covering kicks and punts.”

Now that round one is behind, them the Blue Devils are happy to be in the second round, but are giving the same focus they do each opponent.

Heaton said his team is in a great mood, but added they are coming to practice with the same mentality.

“They are ecstatic,” he said. “They are smiling every day. I’m so happy they are getting to experience this, but I know once they hit that practice field, they will come in ready to work and be fired up for Friday.”

The Blue Devils and Aggies kick off at 7 p.m. Friday night in Jackson. 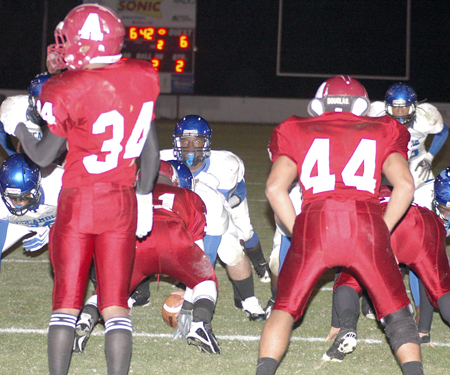 The Escambia County Blue Devils will face the Jackson Aggies this Friday at Jackson.|Photo by Adam Prestridge

Huskey has learning experience as All-Star