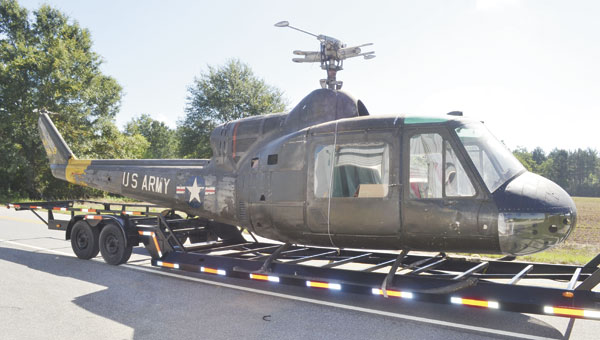 Blast-Off, Inc., employees transported this classic U.S. Army XH-40 helicopter from Fort Rucker to their headquarters near Atmore Municipal Airport on Tuesday. They will spend the next year restoring it to its original glory. This helicopter was a prototype that eventually led to the creation of the famous “Huey” helicopter.

An Atmore company has been given the opportunity to help restore a major piece of military aviation history.

Blast-Off, Inc., owned by Tom Meacham, will spend the next year refurbishing and restoring a classic U.S. Army Helicopter XH-40 helicopter. This helicopter, which has been sitting in storage at Alabama’s Fort Rucker for years, served as the prototype that eventually led to the creation of the influential Bell UH-1 “Huey” helicopter.

The Huey helicopter was the first turbine-powered helicopter used in the U.S. military, and helped to revolutionize combat operations in the Vietnam War. It was primarily effective at medical evacuation, allowing wounded soldiers to safely leave the battlefield quickly to be transported for treatment.

“It’s a very interesting project for us,” Meacham said. “We’ve done museum pieces before, but this is a one-of-a-kind historic piece of equipment.”

Meacham explained that the XH-40 was one of just three experimental prototypes created, and the other two were destroyed in crashes.

“This is the mother lode of Hueys,” Meacham said. “Our job at Blast-Off is to take it back to the original concept.”

Meacham and his employees traveled to Fort Rucker on Monday to pick up the helicopter, loading it onto a specially designed trailer towed by a pick-up truck. They then transported it back to Atmore late Monday evening, and spent Tuesday morning offloading it into the Blast-Off hangar facility.

Meacham said that the process of restoring the Huey will be a meticulous one. Every component will have to be bagged, tagged and photographed, and then cleaned and replaced in a particular sequence. He also said that the helicopter will be restored in its own separate hangar, in order to prevent any accidental contamination by non-authentic parts or equipment.

“When it’s all done, this is going to be a high-value, high-profile piece of aircraft,” Meacham said. “The Marine Corps still flies a Huey version that’s based off this initial prototype model.”

The helicopter was originally built in 1955, and has been at Fort Rucker since 1961. Upon completion of the project, it will be returned to the Fort Rucker Army Aviation Museum for display.

YMCA fitness director Maria Love-Davis and CEO Paul Chason look on as Carolyn Coleman tries out some of the new... read more