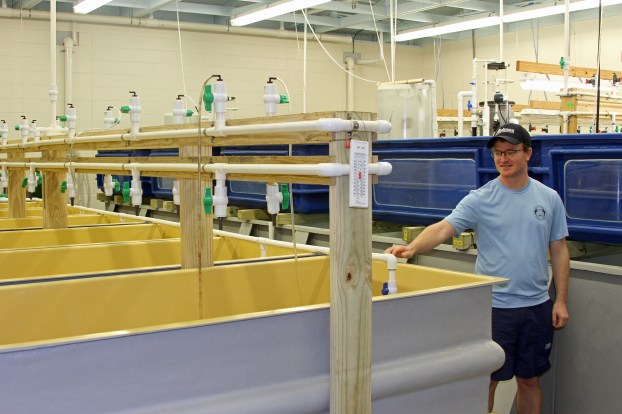 Anyone who has fished the beautiful waters of the Alabama Gulf Coast in the past decade knows that one of the premier inshore species, southern flounder, has been scarce.

A well-documented decline in the southern flounder fishery started about 2008 and, unfortunately, the population hasn’t rebounded. Marine scientists don’t have any definitive reasons for the decline.

The Alabama Marine Resources Division (MRD) changed regulations this year to decrease the recreational bag limit to five flounder per day per angler, implement a commercial trip limit to 40 per person or vessel and increase the size limit to 14 inches total length. Harvest was closed to both recreational and commercial anglers for the whole month of November to protect the flounder that were migrating through the bays, heading for their winter spawning grounds.

However, that is not the only action MRD has taken to mitigate the downturn in the flounder population. MRD headed into uncharted territory for Alabama this past year with an effort to add to the wild population with southern flounder fingerlings raised at the Claude Peteet Mariculture Center in Gulf Shores. A critical step in any spawning program is collection of broodstock – the adult fish.

“They have live flounder categories in their tournaments, and we show up with our trailer to collect these fish,” Westendorf said. “We also have a couple of other anglers who bring us fish one or two at a time.”

MRD collected about 40 fish from the Saltwater Finaddicts tournament and gets 20 to 30 fish from each ACFA tournament for broodstock.

“We bring the flounder back to the Claude Peteet facility, and we quarantine them for three to four weeks to make sure they’re not bringing in any parasites or bacteria,” Westendorf said. “Once we treat them and quarantine them, we introduce them into our breeding populations.”

Currently, MRD has three tanks dedicated to flounder breeding. Flounder are winter spawners; spawning occurs in December, January and into February each year.

“This is our first year of spawning flounder, so we’re still working out some of the kinks,” Westendorf said. “We’re learning the process and idiosyncrasies of flounder. They are a lot more difficult to spawn than other species we have cultured. When we have redfish or Florida pompano and bring them in, it only takes a week or two to get them to eat dead shrimp and cut fish. A flounder takes several weeks longer for them to transition to that type of feeding. One of the hardest parts was getting that initial batch of flounder to start the program. Once you have some fish start eating, the other fish around them start eating as well. It took us a while to get an established population that was eating and comfortable in the tanks and into their conditioning cycle.

“This was the first year we’ve had fish that we were able to spawn. We put them in a nine-month conditioning cycle whereby we recreated the natural cycle in the wild by manipulating the tanks’ water temperature and lighting. We give them spring, summer, and fall conditions, and then we spawn them in the winter season.”

Hatchery staff know when the flounder get ready to spawn when the females become swollen with eggs, indicating they are “ripe.” The females are given a hormone injection to develop the eggs even further so they easily express them.

“We segregate the males and females and put them to sleep for a second,” Westendorf said. “Then we gently squeeze on their abdominal area and the eggs and milt (the fluid containing semen released by males) will start free-flowing out of their bodies. We combine the eggs and milt in a tube, add saltwater to activate the fertilization process, and the eggs fertilize in about one to two minutes.”

Hatchery staff then separate the good (fertilized) eggs from the bad (unfertilized) eggs. The good eggs float in full-strength saltwater, and the bad eggs will sink to the bottom of the container. The good eggs go into specially made incubators to hatch out. The water temperatures in the incubators are kept at about 17 to 18 degrees Celsius (62.5-64.5 degrees Fahrenheit).

“Each tank will hold about 175,000 eggs,” Westendorf said. “Because of the cold water temperature, their metabolism is a little slower so their development and growth is slower than other species we have raised at Claude Peteet. With red drum and pompano, they’ll hatch out in 36 to 48 hours. Flounder take about 72 hours to hatch.”

When hatched, the larval fish feed on a yolk sack until they form eyes and a working mouth to start feeding. Once they start feeding, the fish are moved into tanks with a much lower density of fish, transitioning from 1,000 fish to about 15 fish per liter of water.

Because of the colder temperatures, flounder don’t develop scales as quickly as the other fish raised at the hatchery. They just float around lazily and eat.

The feeding process starts with marine rotifers, a zooplankton, that are near microscopic in size. The next menu item as the fish grow is brine shrimp. Next comes commercially available, pelletized fish feed.

“When we start feeding them rotifers, we add finely-ground meal to start training them to recognize an artificial food source,” Westendorf said. “We condition them by putting the artificial food in first and then put the live feed in, so they recognize this crumble food that’s not moving is fed out at the time as something that is moving. That way they associate the crumble feed as food.”

During the first 3-4 weeks after hatching, the flounder go through a metamorphosis where they transition from swimming upright to lying flat on the bottom of the tank, and their right eye moves to the left side of the head.

Westerndorf said he estimates about 10,000 larval fish are in the mariculture center right now. He expects it will take about 60 days for the fish to reach 1-1.5 inches.

“My goal for this first year is to get one up to a 2-inch fish,” he said. “That will prove that we have successfully closed the cycle, and we can increase that significantly next year. If we can get between 1,000 and 5,000 fish out of the hatchery this year, I think that would be a significant accomplishment for our first year. We have compiled a large amount of information with good documentation, and we know that we will approach it differently next year.”

Once the process is working efficiently, Westerndorf said a reasonable goal is to release about 20,000 flounder into the wild next year and grow the stocking program to about 60,000 in a few years.

“We set our goal at 60,000 fish to be released each year,” he said. “A recent assessment estimated about 400,000 6-inch wild recruits were produced in Mobile Bay and local waters when the flounder population was larger. We don’t want to skew the genetics of the wild population by releasing too many fish. We want to support the stock, but we don’t want to overwhelm the stock with hatchery-raised fish.”

Westendorf said the hatchery is working to expand the number of brood tanks available for the southern flounder project by transitioning tanks used in a previous red snapper program. CCA Alabama provided funds to refurbish the red snapper tanks.

“Flounder are just so different from anything else we’ve done,” he said. “We’ve got to provide colder water temperatures. We’re using data and insights from flounder programs in the Carolinas and Texas, but we have to adapt the process to the environmental conditions here on the Alabama Gulf Coast. It’s a learning process, but we’re pretty excited about what we have learned so far.

“We’ll get there. This will be a successful program in time.”

By David Rainer Another warm winter left Alabama’s duck hunters frustrated, but those who were lucky enough to score permits... read more