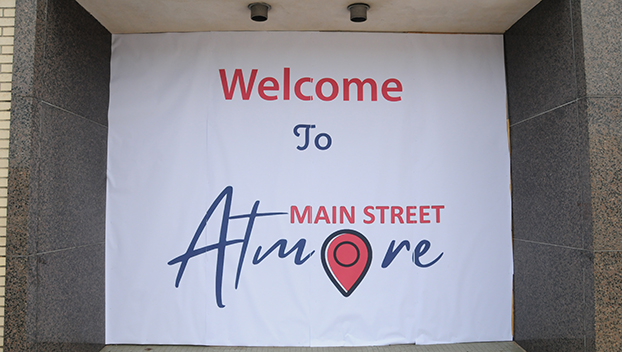 When Main Street Alabama Resource Teammember Randy Wilson unveiled what downtown Atmore could look like during a public presentation on Sept. 3, residents let out a collective noise of approval.

Wilson was one of four teammembers who presented their findings and suggestions to help uplift downtown Atmore’s facade during the two-hour presentation.

Wilson suggested adding some vibrancy, or more colorful aspects to downtown, including flowers, bistro chairs outside of businesses and introducing activitites, to name a few.

He suggested adding shade trees, where their canopies wouldn’t cover the fronts of businesses.

On buildings in downtown, Wilson spoke about their facades.

He said there are stabilization and weatherization grants available to help uncover the buildings’ original brick.

Throughout his presentation, Wilson provided visual examples of what downtown could look like.

Wilson gave a suggestion to put a mural on the silos, near Central Farm Supply.

To help give this plan a vision, Wilson suggested placing pictures of the effort on a building. He said the old Earl’s Jewelers Building would work well.

In fact, the Main Street Atmore logo is already on the building.

Schlinsog, who brings an economic perspective, spoke about how downtown has assets of its own.

He said when he walked around downtown last week and got into some businesses, this is where Atmore really shined.

Schlinsog also spoke about the economic impact within 5 minutes of Atmore, and the best opportunity for growth is with those who made it here.

Other topics discussed at the presentation included promotion, forging partnerships and how to get started.