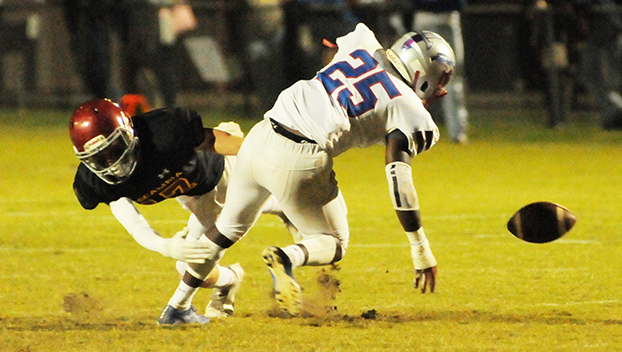 GOING TO THE ‘SHIP

Escambia Academy’s Landon Sims was responsible for three touchdowns and Bubba Nettles added a pair himself to help lead the Cougars to a 54-13 victory over Macon-East tonight in the AISA Class 2A state semifinals.

With the victory, EA improves to 9-1 overall and to its fifth-straight championship game. The Cougars will face Chambers Academy next Fri., Nov. 20, at 3:30 p.m. at Cramton Bowl in Montgomery.

Early in the game, the visiting Knights got on the board with a 20-yard touchdown pass from Kirkland Pugh to Stone Yarnell.

With the game tied at 7-all after Sims’ first touchdown – a 66-yard scamper on the first offensive play of the series – the Knights were deep into Cougar territory and threatening to score.

Then, Tyler Ray-Cloud knocked the ball out of the offenders hands, and Caleb Davis took it to the house with 1:24 left in the opening quarter. EA led 13-7 and never let up from that point.

“It was a resounding win,” Fountain said. “We had a little adversity early, but we did what we had to do and now we get to go to the (championship).

“That’s what we’ve been aiming for,” he said.

After Malaki Haynes secured an interception for EA, Nettles scored on a 39-yard running play with 10:06 left in the first half. The Cougars led 21-7 after the 2-point conversion by Devin Kelly.

Nettles added his second touchdown soon after on a 25-yarder with 5:57 left in the second to help give EA a 27-7 lead at the break.

Sims, known to kick a field goal if needed, turned a bad play into a positive in the third quarter after a bad snap.

On a 35-yard field goal try, Sims retrieved the bad snap, found a man down field for a 20-yard touchdown strike to Randall Bonds to put the Cougars ahead big at 37-7.

Daughtry McGhee added a 2-yard touchdown soon after, and EA led 40-7 going into the fourth.

Sims connected with McGhee on a 51-yard pass with 10:46, and the Cougars added another score late in the fourth.

Macon-East scored at the final buzzer.