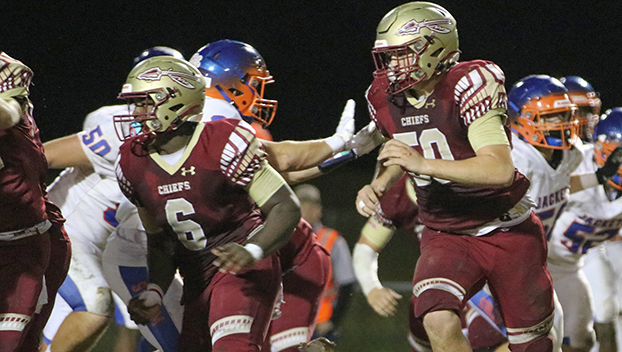 Northview fell 34-19 to Vernon, Fla. in the regional semifinals tonight in Bratt.

With the loss, the Chiefs end their season at 7-2.

“Vernon has a great football team,” Summerford said. “They’re very athletic. I think there were a couple opportunities where we could’ve made it interesting. We squandered those opportunities, whether we turned it over on downs or got behind the sticks.”

Summerford said the first half was tough on the Chiefs’ defense. VHS went led 28-13 at halftime.

“They have some skill guys and you have to cover those guys,” he said.

Summerford said for VHS, two successful onside kicks and a kickoff return for a touchdown were the difference for them.

“That really hurt,” he said. “Special teams were probably the ultimate factor in the game.”

“They know they finished the game the right way,” he said. “It was a great season. I’ll never forget these guys. I don’t know if I can pick a better group of seniors to do this season with.”

Summerford said the community along with the school administration embraced him as a first-year coach in Bratt.

“That’s what makes this place special,” he said.

Cougars fall 36-34 to Chambers in 2A title game

MONTGOMERY — Escambia Academy fell 36-34 to Chambers Academy in a hard-fought battle during the AISA Class 2A state championship... read more