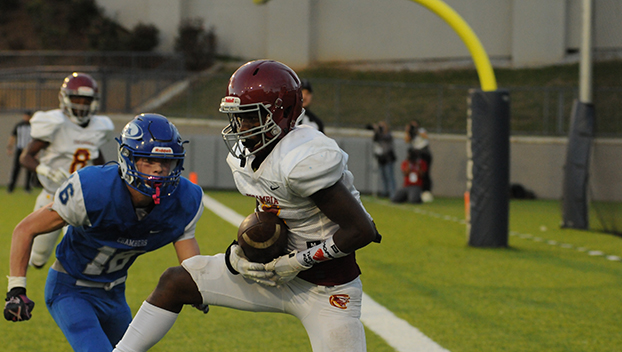 Cougars fall 36-34 to Chambers in 2A title game

MONTGOMERY — Escambia Academy fell 36-34 to Chambers Academy in a hard-fought battle during the AISA Class 2A state championship game tonight at Cramton Bowl.

Cougars running back Bubba Nettles scored five touchdowns, and rushed for 222 yards to lead EA. Nettles added two scores in the fourth quarter to give the Canoe School life and a fighting chance.

Chambers recovered an onside kick with less than 38 seconds left, and ran the clock out.

With the loss, EA finished its season 10-2. This state championship appearance was the Cougars’ fifth straight, and sixth out of the last seven.

“We fought hard the whole night,” he added. “We played hard. We never gave up. We never thought we were going to lose the ball game.”

Trailing 30-20 going into the fourth, EA added a much-needed touchdown on a Nettles 1-yard run with 7:23 left. Landon Sims added the extra point to make it 30-27.

EA’s defense stepped up on the Rebels’ next possession, but CA put together a fake punt.

With the first down, CA’s Payton Allen hit Ty Trammell for a 28-yard touchdown reception with 2:27 left in the game.

The Cougars, never waivering, answered on Nettles’ fifth score of the game after setting himself up on a long pass from Sims.

Earlier in the second half, Nettles scored early in the third on a 81-yard run to cut the game to 22-20.

During the first half, it was a back and forth affair with the Cougars drawing first blood.

Nettles scored on 2-yard and 40-yard scampers in the first; and John White and caught scoring passes from Allen.

In the second, Allen found Trammell again from 20 yards.

Right before halftime, EA held the Rebels with an interception.

For the game, Allen went 16-of-24 for 355 yards and four touchdowns and an interception. Trammell had six receptions for 128 yards; and Allen added 88 yards on the ground.

Good turnout for Music on Main

Many with shopping bags in hand walked up and down Main Street for the Music on Main event tonight in... read more