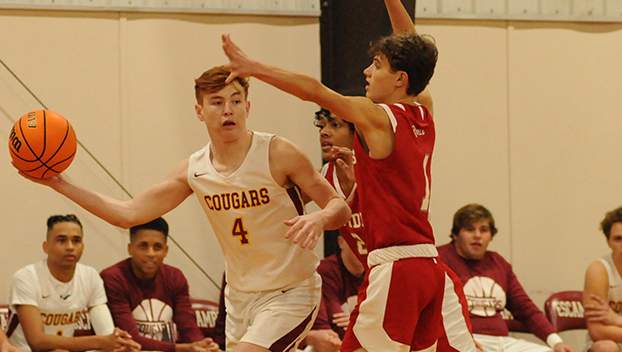 Escambia Academy’s Landon Sims starting taking shots and it paid off for the Cougars Friday night.

Sims 10 of his 23 points in the fourth period to help lead EA to a 43-36 victory over Lowndes Academy in Canoe.

To start the fourth, Sims hit back to back 3-pointers to tie the game at 34 apiece. After Lowndes’ Kason hit a pair of free throws, Sims got a layup on the other end to keep it tight.

After a missed shot, Sims grabbed the rebound and was fouled a short time later. He made his pair, and then EA took the momentum home.

Bubba Nettles, who finished with three points, hit a pair of free shots, and T.J. Riley followed that up with a rebound and a free shot with less than 30 seconds to go.

“I’m proud of the team for not giving up,” EA coach Willie White Jr. said. “I told them at halftime, we’re going to have a track meet with them. They came back and hustled and made the shots.”

Trailing 30-17 at the break, EA outscored LA 11-4 in the third period, thanks to good plays by Daughtry McGhee on an early bucket; a block by Caleb Davis; and a rebound that turned into a three-point play by Riley.

“We got behind and they played well,” White said, adding that they had to change some things to guard Kason.