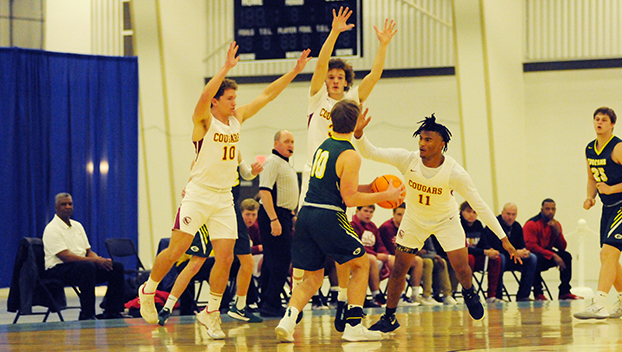 Cougars to play Macon-East Academy Feb. 17 at 5:30 p.m., changed from Tuesday due to weather

MONTGOMERY – Escambia Academy’s slow start picked up steam in the second period and the Cougars went on to beat Edgewood 55-25 in an AISA Class 2A Final 4 contest tonight at the Cramton Bowl’s Multiplex.

The Cougars led 8-3 after the first period, and it was a single-digit game until late in the second period.

EA’s Caleb Davis hit a layup off a Malaki Hanes pass, Daughtry McGhee converted a rebound and putback for a bucket and Landon Sims made an old-fashioned 3-point play with 1:28 to make the game wide open from there.

McGhee added a 3-pointer and Bubba Nettles pierced the Wildcats’ zone defense to help the Cougars to a 22-9 lead at halftime.

From there, EA went on to outscore Edgewood 33-16 in the second half.

With the victory, the Cougars advance to play Macon-East Academy in the state championship this Wed., Feb. 17, at 5:30 p.m. because of the threat of winter weather earlier this week. Macon-East beat Autauga Academy 46-40 in the semifinals.

“We went out there and didn’t play well at all,” White said.

In the first half, the Cougars utilized a half-court press that put the Wildcats out of sorts, forcing turnovers that turned into easy buckets.

“I was glad to get it, but it was ugly,” White said about the win. “I’m sure they’re (Macon-East) licking their chops now thinking they’re probably going tu run us out of here.

“If we play like we did tonight, they will,” he said.

In the fourth period, McGhee got a layup off a rebound, and Hanes added an easy bucket to make it 44-22.

Sims hit a 3-pointer, and Davis then added to field goals off transition.