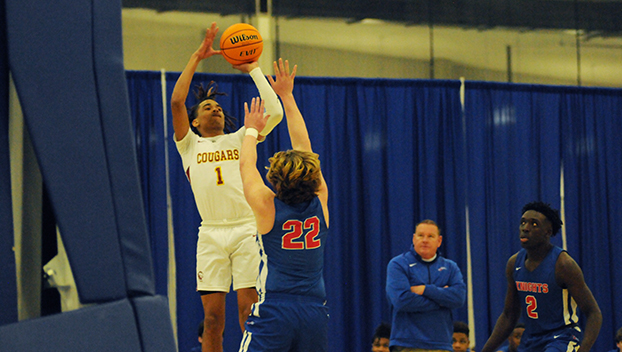 MONTGOMERY — Escambia Academy went from there to the state championship this season.

The Cougars battled with Macon-East in a back-and-forth contest tonight and came up short, falling 62-55 in the Alabama Independent School Association’s Class 2A boys basketball championship at the Multiplex at Cramton Bowl.

EA got off to a hot start, leading 16-9 after the first period, but the Cecil Knights went on a 10-0 run in the second and the game was tied 24-all at halftime. The Cougars went toe to toe with Macon-East in the third period, but trailed 44-41 going into the decider.

In the fourth, the Cougars built a small lead, but it evaporated on an 8-0 run by the Knights.

“I never had any touches with these guys before,” White said. “The first day of practice, if you can’t pass and catch, I say you can’t play. We came from there until the last ball game of the year.

“We’re proud of them inspite the fact they had a disappointing end,” he said. “That’s what it’s all about. We’ll ake it as it is and go back to the drawing board, and get ready for next year.”

White said to get to this point in the season, it took a whole lot of work and sacrifice, along with effort.

“We started off maybe with five or six players,” he said. “We struggled with losses for our first four to five games. We got a few more people to join in the effort. They worked hard.

On the game itself, White said it was a back and forth contest, however.

“We weren’t executing like we should have on offense and defense. It just felt like we weren’t into the game,” he said. “We were imploring them to hustle and do the those things that we worked on,” he said. “I don’t know whether it was the hour or the stage, but maybe this was a bit too big for them.”

During tonight’s game, the Cougars took control from the tip off.

EA built a 11-5 lead thanks to a Bubba Nettles easy bucket down low, a Landon Sims old-fashioned three-point play, a Daughtry McGhee 3-pointer and a Sims from-the-arch conversion.

McGhee then hit a free throw and assisted Nettles on transition, and Chaston Helton got a jumper off a steal for a 14-7 lead.

With a 22-11 lead, the Cougars were in control in the second period until the Knights started battling back.

Chase Dumas pounded the baseline for an up and under and then drove for an easy bucket to cut it to 22-15; Tyler Daniels got a rebound and a putback to go; Jeremiah Carnigie hit a jumper with 3:10 left in the first half; and after an EA timeout, the Knights cut the game to one on a Daniels layup.

EA’s Maliki Hanes ended the run with a jumper, however, MA bounced back to even the game at the break.

The start of the third period was a back-and-forth affair.

By the midway point, MA led 35-32 after Maurice Poole converted a layup in the paint.

Nettles answered with a drive of his own and a three-point play to tie the game back up.

The Knights then took a timeout.

From which, McGhee hit a 3-pointer, and Daniels laid in two free throws to keep the game close.

Sims later hit a drive to the basket to give EA a 40-37 advantage.

McGhee drained a free throw, but MA’s Carlos Carter drove the paint for a bucket, Stone Yarnell followed suit and Poole dished a 3-pointer to give the Knights a 44-41 lead going into the fourth.

MA’s Carter drained two free throws to tie the game, and Nettles went coast to coast for a bucket. Sims followed with a pull up jumer to make it 52-48 with less than 4 minutes to play.

White said this season wouldn’t have been successful without the support from the school, players’ families and fans.

“I wanted to thank our principal (EA headmaster Hugh Fountain) and four fans and parents for lettting us use their kids and for putting up with us,” he said. “Yes, I do get a little excited on the floors, but I’m just trying to get them to play to their fullest potential. The boys understand, but other people may not.

“I’m just sure thankful for letting us have them to get this far,” he said. “Because without them we wouldn’t be here anyway.”

It’s going to be rainy and cold tonight in the Atmore area, according to the National Weather Service. The low... read more