Escambia County Schools Superintendent John Knott announced his plans to retire this summer during Thursday’s meeting of the school board. 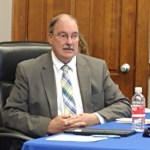 In his announcement, Knott said he would remain in his current position until the end of July 2021.

Members of the board are now challenged with searching for a replacement for the retiring Knott.

A Mobile man died in a single-vehicle crash near the intersection of State Road 97 and Meadows Road, according to... read more