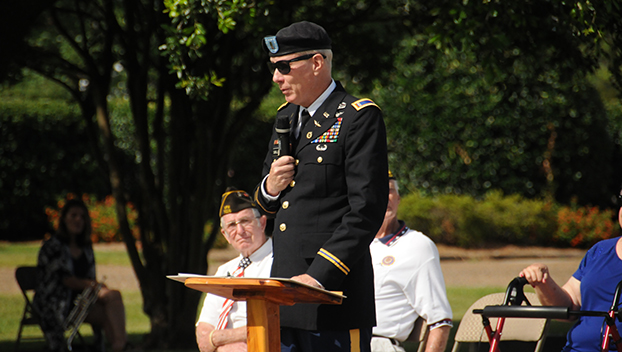 CORRECTION: In an earlier version, we published an incorrect name for Ret. Chief Warrant Officer 5 Greg Turberville’s wife. Her name is Kelly, not Helen. We were happy to set the record straight.

As the ramp lowered and the cabin’s interior lights beamed out in the dark Afghanistan air, U.S. Army (Ret.) Chief Warrant Officer 5 (CW5) Greg Turberville saw the red, white and blue of a flag draped over a coffin.

Turberville, a former aviator, was the Memorial Day Service keynote speaker on May 31 at the Veterans Monument in Atmore. The service is held each year by the VFW Post 7016 or the American Legion Post 90.

Turberville, an Atmore native and Enterprise resident, centered his speech around three veterans who made a significant impact on his life.

Before telling their stories, Turberville reminded the attentive crowd what Memorial Day is all about.

“From my own perspective, our society has come to see this day as a traditional marking of the end of the school year, and the unofficial beginning of summer,” he said. “Memorial Day originated as decoration day, where past conflicts of national members decorated fallen soldiers’ gravestones of previous wars.

“It became an unofficial holiday in 1967,” he said. “Then, it was redesignated as Memorial Day. For me, and to some of you here today, Memorial Day has become quite personal. Some of you have lost family members and warrior friends.”

Turberville spoke of CW5 Jamie D. Weeks, who died in combat on May 14, 2006 in Iraq, when his AH-6M Helicopter was shot down by enemy fire.

“Jamie was one of my best friends and wingmen on many occasions in training and in life,” Turberville said.

Turberville said on Weeks’ final mission, the ground team called for air support, and through the course of battle, three gunships were damaged.

“One returned to base for battle repair,” he said. “Jamie was awakened from his previous shift and rushed to aid.”

Turberville said Weeks blistered the enemy with air and rifle fire, but the enemy connected with a ground to rocket grenade, adding that Weeks and his co-pilot were killed.

Turberville said he was on another mission, and learned of his friend’s death later the same evening.

Turberville said the next veteran – even though he didn’t die in combat – is well deserving of recognition.

About 10 years ago, Turberville said he and his wife, Kelly, met Master Sgt. Edgar Harrell in their neighborhood market.

“He was wearing a hat with ‘USS Indianapolis Survivor,’” Turberville said. “He was one of 316 survivors out of the 879 souls that perished at sea, which to this day is the single greatest loss of life from a ship.”

Harrell survived the attack on July 30, 1945, a date shortly after the ship he was on delivered the atomic bomb, which effectively was the beginning of the end of the war.

Turberville said he made an acception for Harrell because of the late soldier’s dedication of memorializing those who lost their lives that day on the Indianapolis.

“Mr. Harrell carried that torch,” Turberville said. “Men like Harrell make it responsible for our ability to assemble.”

Some 10 years ago, Turberville was waiting on his departure flight from Afghanistan, and there was a delay.

Inquiring as to the delay, he was told that the flight’s mission had been changed to a hero mission.

“Hero missions do not allow for current concurrent passenger missions,” Turberville said. “Since we were such a small group, only 12 of us, we were allowed to do so.

“When the call to manifest occured – around midnight – the rear ramp was lowered allowing the dim interior light to escape in the cold vast Afghanistan darkness,” he said. “The first thing I saw was the illumination of red, white and blue colors of the flag-draped coffin. No one spoke as we parade past.”

Turberville said his team made its way to the front of the plane for the long flight home. He said in every flight departing a hostile country or combat airfield usually cheers erupt as the plane rotates toward home.

“This flight became the exception,” he said. “There was not a peep.”

The plane was carrying the body of Lance Cpl. Loren Buffalo, 20, of Mountain Pine Ark. Buffalo died from wounds suffered after enemy forces attacked his unit with a roadside bomb, according to reports.

“Everyone on board remined stoic and silent,” Turberville said about the flight. “Imagine being greated in the airport terminal. It’s truly a gripping experience and it boggles the emotions each and every time.

“All of us are terribly burdened of the knowledge of the previous cargo that just accompanied our return trip home,” he said.

Turberville said Memorial Day is a day in which all pause to remember and honor the brave veterans just like the three he shared on Monday, “who gave and sacrificed their all in order that we might continue to live and thrive in the greatest nation of the world.”

Following Turberville’s speech, the placing of the wreath was held along with the memorial roll call, a three-gun salute, taps and a benediction.