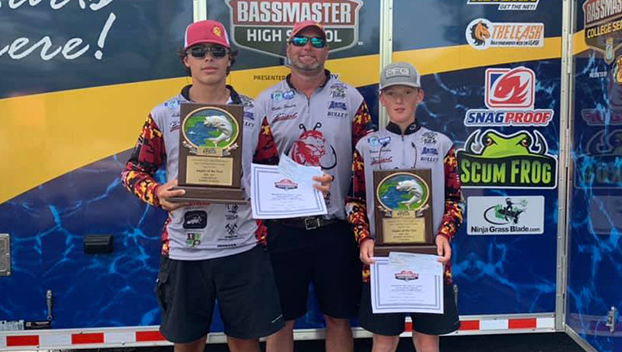 Cougars fishermen Robert Stanley and Luke Bell finished second as Anglers of the Year in the state’s Tiger division to advance to compete in the Mossy Oak Bassmaster High School National Championship Series at Lake Chickamauga in Dayton, Tenn. on July 26-31.

Stanley and Bell are one of between 8-10 teams that qualified from the state. The duo will compete against 250-plus teams from across the country.

“This is a huge accomplishment for the school, team and kids,” EA fishing coach Spencer Overton said.

Overton said when EA decided to establish a fishing team, it had one goal – to make it to state.

“This is new to the school, county and to the kids,” he said. We set a goal to qualify to fish at the state level. In our first tournament of the year, we qualified the whole team to fish at state. So, naturally, our next step was to qualify for nationals.”

Overton said Stanley and Bell are two of 20 anglers from the state that are competing at the champsionship.

To get to the national level, the duo had to finish well enough in three straight tournaments. One tournament was rained out, and the team had three chances, the coach said.

“That’s another accomplishment for these kids,” Overton said.

During the national championship, more than 200 boats begin on day one. After the first day, the field is cut to 12.

“If they were to get selected in the final 12 to fish those last two days, that’s a huge accomplishment in and of itself,” Overton said. “You’re fishing against the best of the best.”