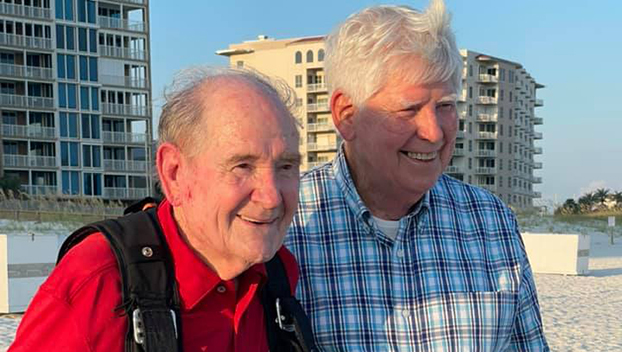 For his 90th birthday, Ray Bolden experienced the immediate feeling of freedom.

Bolden said they were connected to a professional skydiver for the jump, which began at 10,000 feet.

“We free fell without a shoot being open for about 30-40 seconds,” Bolden said. “Then, the shoot opens and you go down from there. It’s a very awesome feeling to feel the immediate feeling of freedom.

“When you leave the airplane, it’s great,” he said.

Staff said because former President George H.W. Bush skydive when he was 90, Bolden asked him if he’d join him for the adventure.

“This was a three-year commitment,” Staff said, adding that he was asked while driving Bolden back and forth from the doctor.

Bolden described the feeling of skydiving as one where all of your worries or cares are forgotten.

“You just enjoy the flight,” he said. “When you look down you see specs of the ocean. When you get a little lower, you see buildings and houses and the landing is really soft. There was no problem at all.”

Bolden said they landed on the beach at the Flora-Bama.

Bolden said skydiving is proven to be safe.

“You’re more than likely to have an accident going to the airport than when you jump,” he siad.

As to if they’ll go again, Bolden said he may jump for his 100th birthday.

“I told Jim we’d jump again on my 100th birthday, but by then I hoped to have my own wings,” he said.

Cougars stay at No. 1 in latest AISA poll

Escambia Academy is still atop the AISA in the latest Alabama Sports Writers Association high school football poll, which was... read more