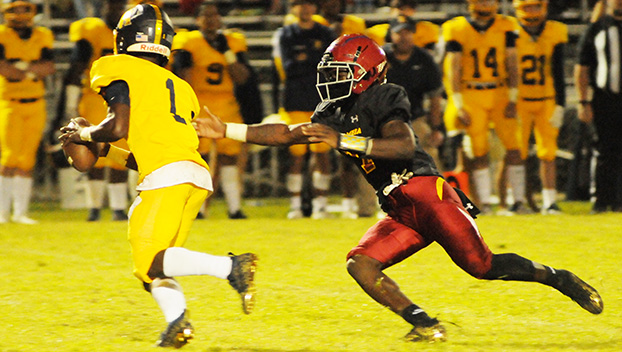 Nettles’ touchdown came with the aid of backup quarterback Jacob Lee, who helped drive the Canoe team down to the red zone. Nettles took it from there 21 yards with 6:38 left and to much applause from coaches and the home crowd.

This was Lee’s first action as a quarterback when it mattered as starting quarterback Landon Sims was ejected from the game during the second quarter on a targeting penalty.

“We lost Red (Sims) in the first half, and it obviously hurt us,” Fountain said. “With Jacob Lee, that’s the first time he’s had substantial time when it mattered. He led us down for a scoring drive in the fourth quarter and that was good.”

According to unofficial stats, EA racked up 155 yards in penalties on the night.

Fountain said the team was trying to find itself all night.

“We just had so many penalties it just wiped us out,” he said. “We never could find ourselves. We just kind of kept putting ourselves in hole after hole. It wasn’t just the penalties. We had three turnovers in the first half.”

Two of the three turnovers were fumbles by Nettles. The other turnover was a fumble, where Knights’ linebacker David McNeil scooped and scored from around 30 yards with 3:33 left in the first.

EA took its first lead of the game early in the second quarter on a 30-yard Nettles run with the extra point.

Throughout the night, and whenever the Cougars would drop back a few steps, their defense stepped up big time. EA penetrated the Knights’ offensive line during the contest, putting pressure on Tuscaloosa Academy’s young quarterbacks.

On one such play, the Cougars converted a stop for a touchdown.

Devin Kelly managed to pick up a fumble and ran it back with 1:55 left in the first half to help put EA ahead 15-6 with a completed 2-point conversion.

“They had hard time blocking us,” Fountain said. “Their quarterbacks were young. We put a lot of pressure on them. I think that was the really the biggest thing.

Next week, EA (5-0) visits Chipley, Fla. in a regular-season contest.