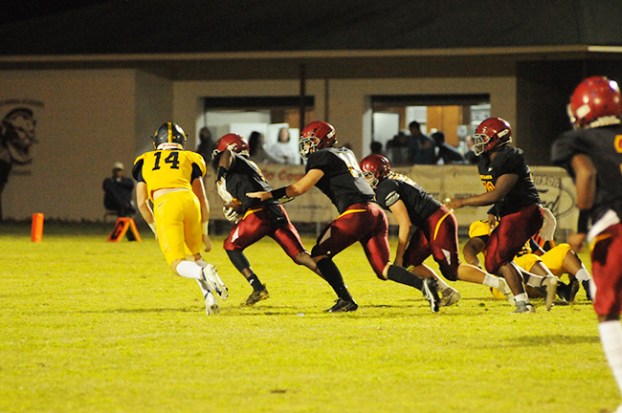 Escambia Academy's Devin Kelly runs the ball back for a score during last week's victory over Tuscaloosa Academy. | File photo

The Cougars took the challenge and beat Chipley, Fla. 22-7 tonight in a regular-season road contest.

Head football coach Hugh Fountain said the team’s proud to get the win as it was a tough game.

“Anytime you play a bigger school (and win) is big for us for a private school,” Fountain said.

EA drew first blood on a 7-yard scamper by Christian Crook in the first quarter. The Cougars added a 40-yard field goal to make it 10-0 a short time later.

The Cougars got the ball back sometime later and quarterback Landon Sims threw a 40-yard pass to Malaki Haynes for a 16-0 lead at halftime.

In the second half, Sims ran the ball in from 35 yards for a score.

Chipley scored with approximately 5 minutes left in the game.

Next week, the Cougars face rival Autauga Academy in a road region contest.

Fountain said tonight’s game will help his team be better prepared later in the season, adding that having the players play under pressure, playing hard and having a solid effort will go a long ways down the road.

Sims was 3-for-7 for 62 yards and one touchdown in the air, and carried the ball 20 times for 167 yards and a score on the ground.

Crook had 74 yards on 12 carries and a touchdown.

EA racked up 347 yards of total offense, and held Chipley to just 13 yards.

Kevin Farrish led the Cougars with two sacks and a caused fumble. Nick Cain added two tackles for a loss.